Push it, as if giving birth. I’ll never get it out.
There is a thing within me, I do not like him.
He came to reside inside five years ago now.
I do not remember the day; it was too dark.
His dank breath touches me in the morning.
The smell of corrosion and long dead meat.
There is never a time when he’s not around.
The mirror shows a scowl behind my edges.
I can tell you about what he whispers to me.
He says down, decline to life lower than life.

There is still a place he cannot stay though.
He tries but I oust him out with slick ease.
The lowest place in me is the highest mind.
I ever moved away from the wasted times.
I run towards the light. the same as we do.
The shadows only turn for the longest night.
These words are a furrow on my dry brow.
He can not chase and catch when I am still.
He tries. He pushes. He nags and rages on.
But I just watch up and put my roots down.

I know it is stupid to tell you of these things.
You can not see within me. Only my words.
But still, there is comfort in believing in you.
No broken bottles from the wall I sit astride.
Only things to come. Only not yet happened.
I sit in painted corners and wait for a breeze.
Sitting. Waiting. Not telling. Hiding a dream.
Sorry not to trust. Not to try. Not to blossom.
I wanted to. I wanted to be what you wanted.
Wanted to be the frog. Yet ever the tadpole.

Imagine you’re on a train. You’re looking out of the windows at sheep and clouds and wondering where sheep would go if they could fly and what clouds would do if they had to wander about in fields when you hear a dog barking.

A dog in the fields? No, this barking is coming from closer than that. It’s coming from this very carriage. From just behind your seat!

Imagine that dogs have been illegal since 2033 when a law was passed forbidding anyone to own a live dog (dead dogs were exempt, which was fortunate because there were many of those following that time) due to the danger posed by canine-flu.

A terrible plague had swept through the dog population in the last month and there were fears of a crossover into the human population. In fact, scientists had proved the risk to be very real. Death was the result of infection. A very quick death. A gruesome death involving a black, icky substance seeping from all orifices.

Imagine the panic in the train after the dog bark was heard. Imagine the rush to the end of the carriage.

Imagine the look on the face of the pensioner as he heard a barking coming from his bag. Imagine his thoughts.

He’s sure there isn’t a dog in his bag. He packed it himself that morning and all it contains are two cheese sandwiches, a biro and a paperback copy of a classic from twenty-fifteen: Fifty Shades of Grey by E.L. James. Oh, and his mobile phone.

Imagine that he opens his bag, aware vaguely as he does so that the carriage is very quiet. His phone is flashing and the barking sound is coming from it. He looks at the screen and realises that he has a call. He taps Answer and the barking stops.

Imagine that when he listens to the phone he hears his grandson’s voice.

“You got the carriage to yourself?”

The pensioner glances around and, to his vague surprise, finds that this is so.

“Remember how you always complain that the other people in the carriage are always talking so that you can’t concentrate on your book?

“Ah, excellent, thank you, Brad, that’s very kind of you!”

“You’re welcome. Have a good one.”

Imagine that the pensioner turned off his phone, put it in his bag and, with a smile of satisfaction, took out his book, settled back in his seat and opened it to page 86.

Q: What is your ultimate horror?
A: In the light it’s easy to think that I have no fears. In a comfortable, air-conditioned office, the thunk of the cleaver, the spray of blood, the un-named body part skittering away into the dark corner seems not to loom, but to sit comfortably on the desk like a plush rabbit. So I guess my ultimate horror is going to be loss of limb in the dark.

Q: Is there something you can’t bear to touch?
A: It used to be woodlice; but I dared myself to pick one up and now the only fear I have in that direction is that I will hurt the little fellahs. Same with other bugs. I suppose that I can sensitise (or de-sensitise) myself to all kinds of things, like dark lanes, snakes, even the loss of body parts, but not other things – like the feeling of accidentally slipping over the edge of a high building and falling to my death. So it’s deadly things, like ice on a mountain ridge, unexpected oil on the parapet or loose gravel on the twisty road high above the plain that I can’t bear to touch. Oh, that and the edge of a razor blade.

Q: What sound sets you on edge?
A: Unexpected ones. Especially in the dark when you wake from a deep sleep knowing that you just heard a … something, somewhere in the house. And then, impossibly, you slip back into sleep and are awakened again. And the sound is in your bedroom. And you know for a fact that the doors are locked and the window are barred and it’s impossible for there to be anyone there. Because she’s dead.

Q: What do you see when you peer into the void?
A: They say that there is nothing to fear but fear itself. So that’s what’s in my void: fear. So I don’t look downward when I peer into the void. I look up and I invite the light. I cover it over myself like a blanket against the cold. I protect myself. I turn my back on the dark and walk lightward.

I can’t talk about people close to me just in case they find out what I think about them.

Now isn’t that a startling statement!

Why wouldn’t I want to open up my heart to the people around me? I mean, I find it easy to say all sorts of things on a public forum so why not to neighbours?

Oh, wait – I got it. There’s a big difference between talking about myself and talking about other people. I’m not scared to tall you about me, I’m scared to tell you what I think about you.

Don’t worry, you’re not one of those people. I like you simply for the fact that you’ve read as far as this. If you haven’t read this far then I probably don’t like you. But that’s okay, because you’ll never find out.

Unless someone tells you.

But really – what’s wrong with me telling someone that I don’t like something about them? I think it’s because I care what people think about me.

Let me have a think about that …

No, it’s not quite that. It’s more related to fear and power.

Oh my gosh, I never realise that I was so screwed up!

And I don’t even want to think about what constitutes power and I why I would want to be unkind to people I think I have power over. Arghh!

Night comes apace
with galloping
teeth and sharp stride.
I would be a
fraid – but I know
now where to hide.

As I was walking the weyrd woods, all the wylde things of natyure fell from my mynde and scattered themselves into the trees. Left and right, they ran, squealing, into the undergrowth, there to grow fat on the workings of my ‘magination.

A shape seeking shade on my right may have been light on leaves ‘fore my feet fell foursquare on the course. Then, as I looked, that shape shimmered and said to my eyes a troubling tale of terrible woe.

Once was a princess who was waltzed away beguiled by a beast of chameleon charms. His bright coat and handsome face fell to rags and rage once he held her in the foliage by the bottom of the garden. She was never touched again by human hands.

Then were kind and tender villagers who, pulled by the plight of the fair princess lost, found, to their cost, that dark depths ‘tween trees, and spaces so foul that the breeze did not ease them, could snaffle and snare the innocent mares and render their menfolk dazzled and gone.

Their shadows I saw as I passed by the maw of the beast and his feast and the moan of the breeze was the sigh and unease of the villagers searching and losing the princess’s trail again and again.

Hearing their woe, I turned and I fled and I stayed in my bed for three days. And the wylde creatures roamed underneath and before in the dark as I shivered with dread.

How do I betray myself?
What methods do I have
To fall below the wheels
Of my juggernaut life?

Delete, delete those words
They don’t say what I mean
They don’t mean enough
They mean too much.

But when I caution myself
When I cradle my heart
I only find that my words
Fly like fading sparks.

Blake knew.
Haig is lost.
I am almost
And yet not.

A long walk by another river
Took me to another house
Where they fed me and smiled.
Then she told me of her fear. Of me.

There’s no ending here.
Tomorrow lives on.
A transient summer.
One flower in an infinite meadow.

Pain, pain, pain
It can be such a drain.
Write, write, write
To take away the fright. 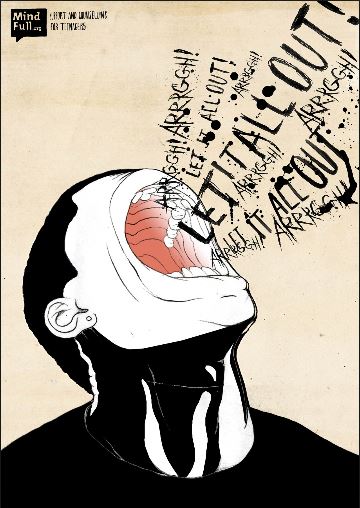 Isn’t it odd that we love slasher stories when they are in writing and yet get scared when the blade materialises before our own eyes.

It’s almost as if ‘bad stuff’, when it’s written down, becomes fiction and therefore becomes enjoyable.

(Image by M&C Saatchi – without permission, but I’m sure they wouldn’t mind – it’s an ad)