Love of the heart settles many karmic accounts. At the end of the day and at the end of many other things, we’re left with something that’s much like clay. And then that turns to dust. (And then something new grows in place of what was – but that’s a whole ‘nother story.) Love is a funny thing. It can leave too, but only if it’s the wrong kind of love. The wrong kind of love is a love of corpses. I know, I know – you’d never have a love like that – it wouldn’t make sense would it? I mean, why love something that’s going to crumble to dust, no matter how good a compost it makes! So, here’s the thing – God doesn’t turn to dust. God’s love never dies. And God is open to being loved anytime you please. You want my advice? Just love God with all your heart. End of the day – the good karma’s just too good to turn down, right? ❤️

Love enables you to experience all relationships with your heart. Those who are simply knowledgeable remember with their head, whereas those who are loving remember with their heart. That chappy in the picture here is Ganesh, who is the remover of obstacles. He’s also an elephant and, as we all remember, he never forgets. I’m not sure if he remembers with his heart or with his head but if it’s the latter then he needs to have a rethink. The heart is a really nice place to live life through. It is the home of love and happiness and all kinds of warm, nice things like that. The head, in contrast is just full of thoughts and memories and other dry stuff. Hey, Ganesh – take away all the obstacles that my oh-so-logical head saddles me with and leave me with a heart full of love – thanks.

Wordly love breaks your heart into many pieces because it becomes distributed. There are cars and cats and songs and sweets and new shiny things out there in the world for you to invest your love in. And they’re all available now if you reach out your hands to touch and take and treat yourself with them. And they’ll all break your heart if you let them. They’ll scatter your energies across time and space and tug your heartstrings at the most unexpected and inconvenient of times. Best to give all your heart and every beat of love within it to God instead. God won’t take your love away. God will only return it to you with interest. Interested?

On the cycle path, as I pass by, two birds call to each other from amidst the bushes, with a sound like marbles hitting together.

I look towards them, but can see nothing but late-summer green and early-morning light.

In my hands, as my thumbs pause for a moment, five beeps ring out in quick succession, like a counterpoint to the beating of my heart.

I look down at the screen and see that you have liked my four most recent posts and have followed me. 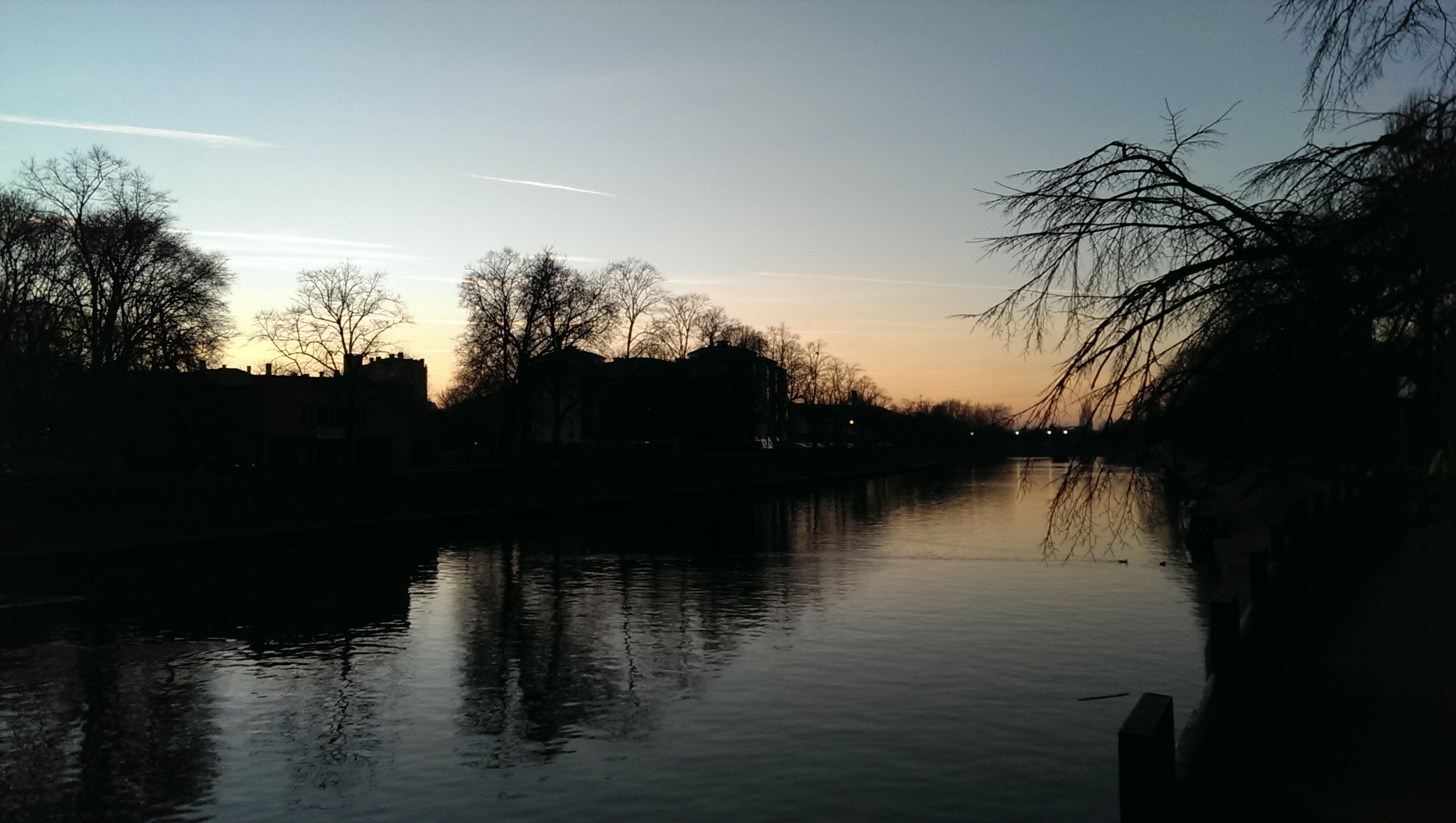 The driver breathes into the sky.
His breath disappears into twilight.

After the car vanished from sight.
When the last ripples had died away.
He was left to sit and ponder his life.

On a bench by the river,
Clothes soaking wet.
One life pulled from the depths.
Another lost beneath.

Still your mind.
None of that was real.

Are you real?
Do you sit or do you stand?
Does the air move in and out of your lungs?
Do you seek to escape and find a new home far away?

If you …
If I …
If we were to meet and fuse – our particles becoming exotic fields of quarks and quirk. If we were to combine in a bubble and fizz of chemical interaction. If one and one were to become the square root of nine and we were equal to that challenge.

But there are worlds and words with no place for us.
This is as far as we get.
As far as we go.
So go.
Go slow as you walk away from me.
Take all you can bear to carry.
Take the heart and the part of me that belongs to you truly.
Stretch the moment.
Leave my eyes.

We
Were
Never
Even
We
When
We
Were
There.

So what chance do we have?
Now that we are
Gone.

There are few things I really, truly want in life.

But perhaps needing fairness is asking for too much.

Just the basics then – strawberries, sleep.

And I get these already, so all is good.

Everyone has a corner. Everyone argues their corner. We are ever territorial.

Do I need to defend, or would it be safer to cede?

There are wide open spaces that succour and give. But they are not here.

I let my heart expand into those places
Let my hair grow long and curly with love
Open my eyes to the life within my heart
Keep marching forward towards myself.

It’s difficult for me to take responsibility for the effects my words have on people.

I see the things I say as having their own life once they leave my mouth. They have their own force and energy and they go places of their own choosing.

Like bullets from a gun, once they have left the barrel, my words have the freedom to choose their own targets and do what they may with them.

Likewise, I have no control over the way that people are affected by my words. People duck and weave in patterns of their own choosing. They dodge or they stand still – it’s up to them.

And when my words hit their target, the people have made the choice to wear kevlar or not. The depth to which my words penetrate into their minds and lives is determined by how much armour they chose to wear before they ever knew me.

And should the people choose to keep my words within them, or have them surgically removed by a qualified practitioner of the art of word removal; well that is also within their purview.

In matters of the heart, the owner of said heart has all rights.

Where have all the Contrails Gone? Long Time Passing.

She locked revenge away for a moment and gazed into and beyond a sky that seemed washed of all cloud and sense. The kind of sky she used to paint at school where she mixed blue with increasing amounts of white and just painted across and across, getting lighter and whiter towards where the line where the ground began. She did it just like Miss Fletcher told her to.

Strange to think that she should get her idea of what skies should look like from a woman whose hair came from a bottle, body mass index from McDonald’s and memories from a time long before all the clouds disappeared.

A dark speck against the blue. She tried to follow and lost it. Probably just another piece of dust in her eye. She was getting more of those as she got older and her eyes became more like dried river beds. As the land had parched under the relentless sun it had started to take to the air and to her clothes, hair and eyes.

No – there is was again – definitely a bird. She marvelled for a moment, thinking herself back home, then remembered where she was. Remembered that she was in the North. Birds were more common here. And not just the ones that fed on flesh. On carrion.

She followed the arc of the bird as it coasted in the wind-lanes. Probably searching for lunch. Insects? Small animal? Or something worse. As she thought of food, she felt, rather than heard, the trail of gas rise in her stomach and was disgusted by her body’s reaction. Roadkill and hunger were not natural companions for her. Not as natural as they had become for some of her friends, and even her own family.

As the bird swooped downwards, she lost it among the trees. Some of these were still in their overcoats, as they had been all winter. Others were just rising from sleep and still getting dressed. The warmth of the day was encouraging and they had already donned their filmy underclothes in various shades of green.

She searched the boughs for nests, but couldn’t find any. But they wouldn’t risk nesting here surely. Too close to man the hunter – still close to the top of the food-chain, but for how long? A wry smile.

Her eyes climbed through the nearest tree. Down along the branches until they met the trunk, and then clambered down the bark until they met the ground. Dry earth. Too dry for spring. No promise for the grass gathered there with the moss. Green now, but like a vehicle without fuel, it just wasn’t going to go far. More’s the pity that it was even trying. She felt obscurely sad for the grass. It had no idea what was coming.

It was a bright day. A good day to be alive. A day to celebrate and dance. And so why did her thoughts keep turning to destruction, darkness and death. An anchor on her heart. A weight taking her down to depths. She shook her head and raised her eyes back to the sky. Still blue. Still empty. Stilled, like her heart.